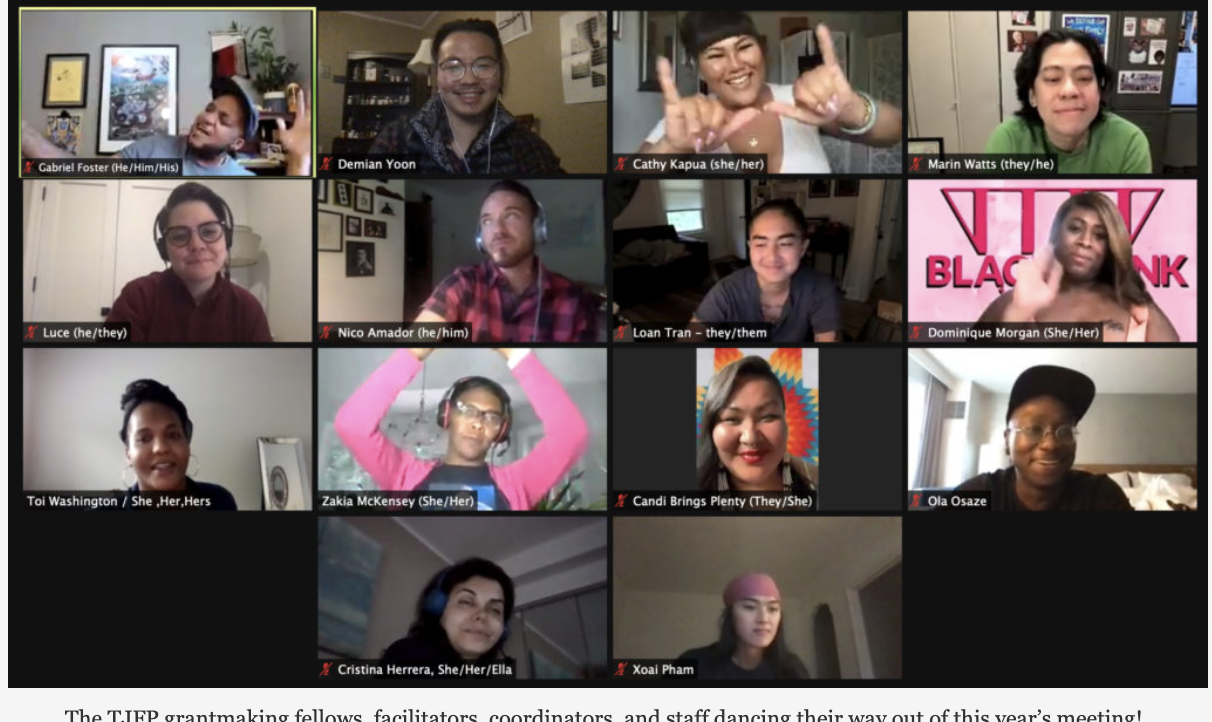 We’re pleased to announce that TJFP’s 2021 grantmaking fellows awarded $850,000 in grants to 191 trans-led grassroots groups, projects, and organizations doing amazing, creative, and groundbreaking trans justice work across the US and US territories! Find out more through our 2021 grantee directory page, and see the full list at the bottom of this post!

Our Community Grantmaking Fellows, grantmaking coordination team, and staff are deeply grateful and proud of all that TJFP has accomplished this year. Whether you fundraised on our behalf, shared our social media posts, donated, or used your platforms to lift up grassroots trans organizing, you helped make this happen! Along with the 117 groups that received a ReUp grant this year, we’re moving over $1.3 million to 308 groups in 2021!

Over the past nine years we’ve been able to support so many new groups and projects as they incubate and grow. For many of our applicants, TJFP is their first grant award, or first time submitting a funding application, period. We’ve also been able to continue to support our long time grantees over the years as they have become vital cornerstones in their communities. It’s heartening and beautiful to see what doors open for our grantees, the connections they make, the funding they access, and what they achieve with support and belief in their leadership!

Of our 191 grantees selected in May…

Over the past few months, the 2021 community grantmaking fellows spent hour after hour carefully reading and reviewing 211 applications from trans-led, grassroots groups and projects from around the country. As a cohort of trans, BIPOC organizers and activists, TJFP’s fellows have the opportunity to sit in the powerful role of grantmaker, a power often held by people and institutions outside of their communities. Yet since our fellows belong to trans and non-binary communities in the very places we see applications coming in from, this position can also come with the heavy weight of tough funding decisions. Our fellows do this highly emotional work with a whole lot of heart: reviewing applications using an intersectional lens, paying close attention to where resources are being redistributed geographically, and doing this with no strings attached and trusting that TJFP grantees know what’s best for their own communities.

We are so grateful for this year’s team and for the time and energy that was poured into every part of this process. While community-led grantmaking isn’t always quick and easy, it’s always worth it for us!

It’s because of this team and our amazing community that we were able to give so much money to so many incredible grassroots trans justice groups. As always, we are inspired by each and every application that was submitted.

Again, we thank you from the bottom of our hearts for being part of the legacy of our trans justice movements.

Check out these amazing trans justice groups that were funded this year! We’re so excited to share their brilliant work.

The TJFP grantmaking fellows, facilitators, coordinators, and staff dancing their way out of this year’s meeting!

The groups listed below with an asterisk (*) are 2020/2021 grantees that received a ReUp grant!

Life In My Days, Waterbury

the passionvine project, lake worth

FOR OUR SIBS Inc., Decatur

I Am Human Foundation, Ellenwood

For the Culture, Minneapolis  *

Bois of the Sippi, Corinth

Transitioning Of The Carolinas, Charlotte

In Honor Of Our Roots, New York

What Will I Become, Bronx

Beyond These Walls, Portland  *

Hearts on a Wire, Philadelphia

We Are Family, North Charleston  *

The Next Generation Project, Spring

Out in the Open, Brattleboro

Beyond Bars and Binaries, Tacoma  *