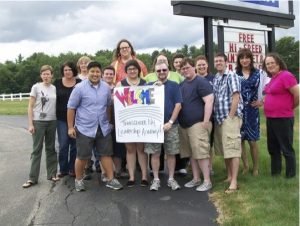 As I was settling down in my usual coffee shop in Brooklyn, getting ready to speak with Julian Long from Transgender New Hampshire (TG-NH), I was feeling a bit sheepish. I didn’t know much about the state of New Hampshire or the experiences of trans people living there. So I did a bit of research about the great state of NH and here is what I found out. New Hampshire is the 5th smallest state with a population of 1.3 million. Only an estimated 38,000 people out of that 1.3 million publicly identify as LGBT.* Boston, the nearest big city and the place with the most support and medical resources for trans people in the area, is not accessible to many New Hampshire residents, especially those in the western and northern regions of the state.

Why all the numbers? I wanted to get my head out of that Brooklyn coffee shop (which, at the moment, felt like it had a population of 500) and think about what it might mean to live somewhere so rural that even if there were other trans people nearby, they might not be out because of hostility in their local community. It’s hard to say what the trans population in the state of New Hampshire is, because as Julian pointed out to me, New Hampshire is comprised of many low-population-density, fairly rural regions, which have few resources for LGBT communities in general and almost none for transgender communities specifically. That’s why TG-NH works to build connections and bring badly needed resources to trans people throughout the state.

Starting with the idea that change begins at the grassroots level, TG-NH has held four state-wide regional meetings over the last year to grow local community, bring people together, and share resources. Because the southeastern part of the state is more densely populated and is also where the University of New Hampshire is located, they have had more success organizing regionally there. The northern part of the state is a mountainous region where travel can be tough, especially in the winter. And throughout New Hampshire there are many sparsely populated areas where it is hard to hold an event with significant turnout without requiring people to drive long distances. TG-NH is still working hard to get regional meetings off the ground in those places. Having a strong online presence has helped with rural organizing, visibility, and connectedness to community when people can’t always reach each other in person.

TG-NH has also been working to tackle state policy issues. Recently they collaborated with the Gay and Lesbian Advocates and Defenders to work on getting the city of Portsmouth, NH to adopt a non-discrimination policy for transgender people. “Fighting discrimination not only provides crucial protections to an extremely vulnerable and marginalized community, but it benefits the whole community,” Julian explained. The policy was passed in March of 2014. For only being 2 years old, TG-NH has made huge strides! The struggle continues as they are now tackling the DMV’s policy for changing gender markers on IDs.

Along with TG-NH’s great successes over the last two years, challenges persist. They’ve been through some growing pains and leadership transition. They realize that while they are diverse in terms of background, they are not as diverse in terms of state geography. TG-NH is also run solely by volunteers and they are not a 501c3, which can make fundraising tough. Julian stressed that “keeping our people fed, housed, and in jobs” remains one of the greatest challenges. “Sometimes we just need to talk to one another,” he explained.

When I asked Julian what people could do to support TG-NH, he answered with an official call to trans people in New Hampshire to get involved with TG-NH’s steering committee. They are especially seeking people who know local trans resources, who can connect to other trans people in their own community, or have some non-profit experience. TG-NH believes strongly in being an organization that is led by and for trans people. But local non-trans allies, they need your help too: TG-NH needs space to bring people together in their own regions, and to host potlucks and meetings, so hand over the keys to your meeting rooms! Share your resources! If you want to get in touch with TG-NH, email them at TransgenderNH@gmail.com or visit their facebook page here.

*According to the Transgender Law Center Equality Map