Passing on Possibility: A conversation with Arianna Lint 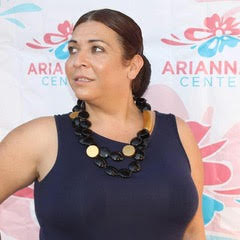 When I first met Arianna Lint, the founder and CEO of Arianna’s Center, I was dazzled by the strength and intention in her voice, speaking truth to power as she demanded that federal departments fund trans justice work in the South. At a roundtable discussion in 2014 with other trans people working in HIV prevention and care, she brought her point across with heart and with hard hitting facts. “Our hands are tied while our people are dying,” she said, raising her hands to show actual handcuffs on her wrists, demanding the attention of everyone in the room. “Without the money to do this work, I can’t save them!” Arianna has always had the fire and drive to do anything to help her people. We’re so grateful that she sat down with us on a Zoom call to tell us more about what fuels her in “working, advocating, and resisting” on behalf of her trans family everywhere, including why she hosted a tutorial on applying to TJFP this past year.

“My family, by choice”

Arianna is the founder and CEO of Arianna’s Center.  Founded in 2015 in Florida, Arianna’s Center is the only direct service and advocacy organization based in South Florida, led by a trans Latina openly living with HIV.  Arianna described her organization as one that focuses on “the most vulnerable communities–sex workers, people living openly with HIV, homeless, trans Latinx immigrants, people who are undocumented, people who are just released from jail, prison, detention centers.”

When I asked Arianna to describe herself and where she calls home, Arianna was quick to explain that because she’s a trans Latina immigrant living in the United States, doing work in many places, it’s “very difficult” to say where she’d call home. “I call home Florida, I call home the United States…I call home Puerto Rico.” But, she added, the most important home for her is “my transgender community.” Of her twenty-plus years living in the United States, “the transgender community was my family, by choice,” providing her the support, advice, and belief in her dreams that fuels the fire I could see in her from our very first meeting. From volunteering at an HIV clinic in Florida, to opening and leading her own organization, Arianna has been sustained by her community’s belief in her. Now, five years after receiving her first TJFP grant in 2016, she’s making sure Spanish-speaking activists and leaders learn about how funding and grantmaking processes work. Even though Arianna and her team have successfully grown their budget, making Arianna’s Center no longer eligible for a TJFP grant award, her work still is still taking on new forms and shapes as her work continues.

Arianna told me about her childhood in Peru, where she watched her parents do social work and became involved in a club for children seeking to make social impacts in their neighborhoods. “I try to help defend others, so that is my personality all the way from the beginning,” she told me with a laugh. In school, facing homophobic bullying, she asked her teacher why other students were treating her unfairly. Her teacher responded with a quote from a telenovela–”When the dogs bark, it’s because you’re walking forward.” Arianna took that to heart–she’s moved forward since then and has never stopped. She’s a former lawyer and political sciences graduate of San Martín de Porres University in Lima, once ran a construction company, and these days she’s constantly on the phone, strategizing and building. 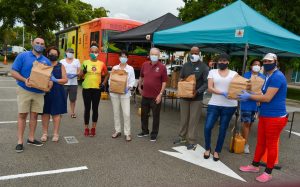 Arianna was diagnosed with HIV after moving to the United States and, in trying to be “the best version of me” after her diagnosis, began volunteering at an HIV clinic in Florida. In her time there as a volunteer and later as a case manager, “I see my community needs a lot,” she remembered. Hired at an LGBT organization as the director of transgender services, she began to envision what her own, trans led organization might look like–“I can hire more trans people I could work with more openly. I can develop the programs more directly.” Striking out independently in 2015, she applied and received a TJFP grant in 2016 as Translatina Coalition Florida Chapter, was a grantee again in 2017 and 2018 as Arianna’s Center, and in 2020 received a grant for the Puerto Rican branch of Arianna’s Center.

“I am a person who made my entire career and activist life selling dreams…because somebody sold dreams to me.”

Now, on top of providing testing and case management for clients and trainings for service providers, Arianna’s Center also has a two-week housing program and care linkage for trans people who are HIV positive and recently released from incarceration. In the last two years, Arianna’s Center has continued to uplift the voices of the trans community, pairing with the University of Puerto Rico for “the first need assessment specifically for trans individuals in Puerto Rico.” Arianna has also been working with organizations like Human Rights Watch, Transgender Law Center, and Positively Trans on similar surveys for trans and HIV positive people in South Florida. In a 2021 interview with Arianna in Shoutout Miami, she said proudly, “Now, if you are trans in South Florida, or if your agency wants to work with trans people, Arianna’s Center is the first resource they turn to.” 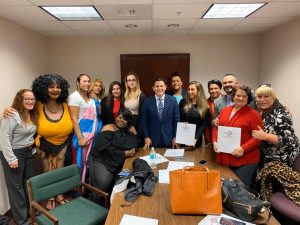 “We’re fundraisers, but not experts in fundraising,” Arianna told me when I asked her about what it’s like to raise money for her work. Still, one fundraising idea she shared with me was clearly born from expertise in the needs of her communities. To raise money and also encourage Puerto Rican trans youth empowerment, Arianna wants to create an annual pageant to crown a Puerto Rican contestant to represent Puerto Rico abroad. By harnessing the prestige of the pageant competition system specifically among the trans communities she serves, and by incorporating HIV education and advocacy into the pageant, she wants Puerto Rican trans youth to pursue careers and feel pride in their identities and experiences.

Arianna understands the power of being validated by one’s own peers in all parts of life, including in the funding world. The power of having your own community, who knows the impact of the change you’re hoping to make, support your work, not an outside institution that is disconnected from what you know your people really need. She recalled receiving her first grant from TJFP in 2016 and crying from excitement, and how that first grant helped her to “grow as a person, as a professional, as an agency,” building Arianna’s Center to where it is today. Despite the fact that Arianna’s Center is no longer able to access funding from TJFP, as their budget size is beyond TJFP’s eligibility criteria, Arianna still wanted to pass that excitement to other activists and leaders who might be starting out, just as she did five years ago, with little knowledge of how to get funding and support for their work. “It’s time for these dreams to come true,” she said. “As soon as you get your first grant, you’re going to start getting different grants because you’re going to start looking for more.”

In particular, she’s acutely aware of the language barrier to accessing most funding available. While TJFP provides a Spanish language application, Arianna wanted to be on hand to explain more of the funding nuances, because she knows “how difficult it is to get access to the first grant…as grassroots and vulnerable activists around the country, especially in the South.” With her experience as a bilingual TJFP grantee, she organized a tutorial workshop and invited TJFP staff as a “bridge” to introduce and explain the TJFP application process to “a lot of emerging leaders and trans led groups around the South.”

It was so wonderful to plan with Arianna to prep for the tutorial and speak to approximately 20 trans organizers from North Carolina, Texas, Georgia, Florida and Puerto Rico, most of whom were Latinx. This was also a great opportunity for TJFP as well and we were so honored to be able to demystify the grant application process and connect with potential new grantees.  We are so grateful to see someone in Arianna’s position to leverage her power and relationships and provide opportunities far and wide.

Leaders and innovators like Arianna are exactly why TJFP exists.  As they continue to break barriers while simultaneously responding to multiple community needs we see our work as resourcing them and advocating from them in philanthropic spaces.  Thank you Arianna for all of your years of tireless work making significant and life changing impact! 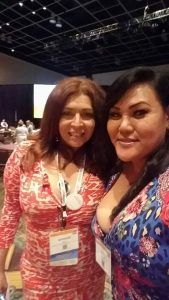 Arianna Lint and Cathy Kapua in 2018

Comments Off on Passing on Possibility: A conversation with Arianna Lint