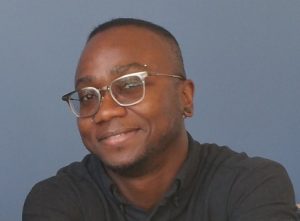 Ola is a trans masculine queer of Edo and Yoruba descent, who was born in Port Harcourt, Rivers State and now resides in Houston, Texas. Ola is the Co-Director for the Black LGBTQ+ Migrant Project and has been a community organizer for many years, including working with Transgender Law Center, the Audre Lorde Project, Uhuru Wazobia (one of the first LGBT groups for African immigrants in the US), Queers for Economic Justice and Sylvia Rivera Law Project. Ola is a 2015 Voices of Our Nation Arts workshop (VONA) fellow, and has writings published in Apogee, Qzine, Black Looks, and the anthologies Black Futures and Queer Africa II.

We’re so grateful that you said yes to us and that you’re bringing your thoughtful care to this year’s grantmaking panel!