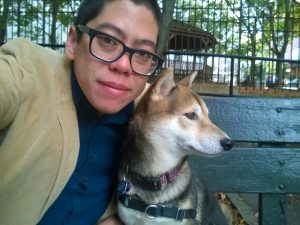 Marin is a queer trans Filipino-American videographer, artist, and media educator living and working in East Harlem, NY. Culturally rooted in the American South, with family ties to the Philippines, he uses video, photography, and textiles to explore the intersections of culture, gender, and ethnicity within his artistic practice. His work has been exhibited in Atlanta, San Francisco, and New York as well as internationally in the UK.

In addition to his artistic work he is tireless advocate for social justice, with a particular emphasis on media education and lesbian, gay, bisexual, trans, and gender non-conforming communities. He’s spent the last decade working with homeless populations, and providing arts and media education and support to LGBTQ youth. As an educator, he focuses on LGBTQ youth programming and media education. He believes art and media can have tremendous transformative effects on how youth view and value themselves, and that it is critical that young people see themselves reflected in the media. He’s committed to helping young people find their voice, harness their stories, and change the landscape of queer media.

TJFP has loved working with you over the last year and we cannot wait to have you at the decision making table, Marin!