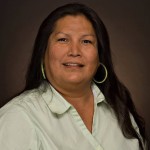 Trudie Jackson is an enrolled tribal member of Navajo Nation from Teec Nos Pos, Arizona. Her Clans are Bitter Water Clan born for the Leaf Clan. The Mexican Clan are her paternal clan and Yucca Fruit-Strung-Out-In-A-Line Clan are her maternal clan.

Trudie strongly advocates on behalf of American Indian LGBTQ Two Spirited members. She is a non-traditional student at Arizona State University (ASU) pursuing double undergraduate degrees in Public Service Public Policy and American Indian Studies with an anticipated graduation of August 2015. She is actively involved in ASU Rainbow Coalition as an e-board member and Director of Advocacy, a member of the Native American Student Organization, and a member of ASU TRiO Downtown Campus.