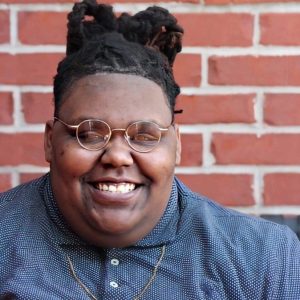 English C. Fields (she/her/hers/Kidd) is a member of the Brown Boi Project(first and only member from the state of Mississippi), a 2015-2016 White House Initiative on HBCUs ambassador for Rust College, an Alpha Kappa Alpha Sorority, Inc. initiated.(Fall 16). English has been a contributor to Ebony, HBCU Digest and Diverse Education. She has also been featured in Christian Hendrix’s South of the Ohio, Chronicles of Higher Education’s #AskMe campaign, and Buzzfeed. She earned her bachelor’s of arts degree with honors in English Literature from Rust College(Holly Springs, Ms), and a master’s in Public Administration from Lincoln Memorial University(Harrogate, TN). She is currently a doctoral student at Florida A&M University in the College of Education for Educational Leadership. Her research will center around masculinity among Black Greek Lettered sorority members that attended HBCUs(lesbian, bisexual, transgender, and same gender loving individuals.)

In addition, English is the proud owner of Kidd’s Brain Freeze, LLC. A snowcone shop located in her hometown where snowcone meets historically black colleges and universities(HBCUs.) Kidd’s Brain Freeze, LLC. specializes in HBCU inspired snowcones because English is a big advocate to HBCUs just as LGBTQ rights. She is working on a children’s book, and a look book which she hopes to have out within the next two years. Upon completion of her doctoral degree, she has hopes of working in higher education to one day becoming an HBCU Provost or President.