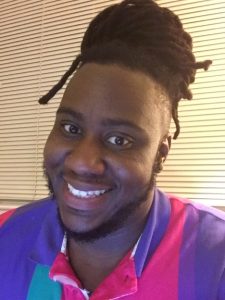 Asher Kolieboi hails from Saint Louis, Missouri, by way of Monrovia, Liberia. A longtime LGBTQ and racial justice community organizer, Asher currently serves as the Assistant University Chaplain at Johns Hopkins University. In addition to his work as a minister, Asher has worked with the National LGBT Task Force, Planned Parenthood, the Center For Progressive Leadership, and the Trans 100. Asher co-organized the 2010 Soulforce Equality Ride, a two-month bus tour of young adults ages 18-28 who traveled to Christian colleges and universities to discuss the intersections of LGBTQ identities and faith. Later that year, he co-founded Legalize Trans, a trans affirming t-shirt company and social media campaign. In 2011 Asher launched (un)heard: Transmasculine People of Color Speak! An ethnographic audio-visual installation about the experiences of transmasculine people of color that debuted at Princeton University that year.