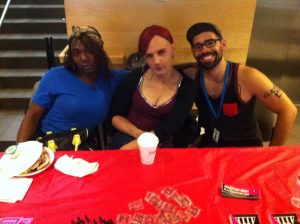 Prison abolition is real. It’s not a theoretical issue or a pipe dream. It’s a concrete issue and the stakes are high. This is what the staff, “free world” volunteers, and incarcerated members of Black and Pink think about as they do prison abolition work, as they are everyday outraged by the violence against LGBTQ people in the prison industrial complex.

Black and Pink is an organization of  volunteers who work across 8 national chapters, with the most active being in Boston, MA. There are over 6,500 incarcerated LGBTQ folks who are doing the work of Black and Pink. Both inside and outside of the prison industrial complex, Black and Pink volunteers are connecting with each other to abolish a system that is rooted in “isms.”

When I talked with Jason, Black and Pink’s one staff member, he highlighted two incredible ways that incremental but tremendous change is being made towards the concrete goal of prison abolition and liberation. I will lay them out here for you, in hopes that you will see that making change at both the systemic level and in someone’s daily life is attainable. 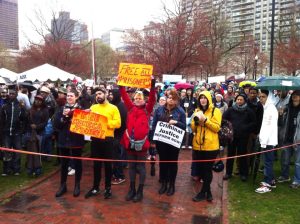 Black and Pink at Jobs Not Jails rally

The Monthly Newspaper: With stories, poetry, art, and articles by LGBTQ people in prison, the monthly newspaper is 80% prisoner generated and allows for prisoners to connect with each other. It is distributed to 4,200 prisoners across the United States and is an effective tool for organizing prisoners and sharing strategies for change. Prisoners are able to tell stories about how they have fought for access to hormones, release from solitary confinement, entitlement to programs, and other demands. Recently an incarcerated woman in California wrote into the newspaper multiple times, asking Black and Pink to organize volunteers to write letters to her warden. Her goal was to get out of solitary confinement and get access to hormones. This process has connected her to other trans women across the country and has succeeded in getting her out of solitary confinement, although she is still fighting for hormones. She was so inspired by her experience that she started a Black and Pink chapter in California! Lesson learned from this story? Victory doesn’t always mean winning all your demands. Sometimes it looks more like building cross-struggle alliances and leadership development.

Black and Pink at the Chicago Dyke March

The Pen Pal Program: Ok, there’s a chance that if you’ve read this far, you might be inspired, outraged, intrigued…but still not know what you can do to support incarcerated LGBTQ people. I’ll make it real easy for you. You can be a pen pal. Right now there are over 6,500 prisoner members and only 2,500 successful pen pals/outside connections. By becoming a Pen Pal, “free world” volunteers work in solidarity with prisoners through a mutually beneficial connection. “Free world” pen pals are educated on the issues that affect LGBTQ prisoners daily and LGBTQ prisoners are relived from some isolation and gain support on many levels. One Chicago-based pen pal has been visiting and writing their pen pal for well over a year. They have been developing a connection based on care and compassion. This has helped the “free world” pen pal ground their work in concrete issues that they have developed into workshops like the School to Prison Pipeline. If you want to become a pen pal or have more questions about it, click here.

I truly hope you will take this moment to understand that prison abolition is a reality that can be achieved. And for the moments in which we’re feeling defeated, I’ll let the resilient words of Zarabee from California keep us fighting for justice.

The Light of Our Great Spirit

Let us be proud of who we are,
Whether we are black, pink, circle or square.
Locked up or free WE will be,
With our head held high, we will strive and survive,
As our sister Brielle in Louisiana said,
“Still I stand and never will I fall,”
Let that be the call to oppression, depression, hatred,
Alienation, discrimination, loneliness, and fear,
Loving ourselves let us be proud to be queer.
Brothers and Sisters, let us rise,
Letting the loves for our lives shine,
Like a beacon of light, A thousand suns,
Rising to the sky at once.
A light of our great spirit.

—Zarabee, California
From the June 2014 issue of the Black and Pink Newspaper

Comments Off on Trans Justice in Action: 2014 Grantee Black and Pink