I interrupted Obama because we need to be heard 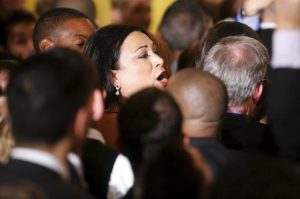 Jennicet Gutiérrez challenges Obama calling for an end to deportations.

At yesterday’s White House Pride Reception, activist Jennicet Gutiérrez spoke up and spoke loudly, interrupting President Obama’s speech to call attention the discrimination and violence trans immigrants are experiencing.  Gutiérrez is an undocumented trans Latina leader with FAMILIA TQLM in the campaign for #Not1More lgbtq deportation.  Unwilling to be shushed or silenced, Jennicet Gutiérrez was escorted out of the press conference.

This morning the Washingtonblade.com released an article written by Ms. Gutiérrez.

She writes, “It is heartbreaking to see how raising these issues were received by the president and by those in attendance. In the tradition of how Pride started, I interrupted his speech because it is time for our issues and struggles to be heard. I stood for what is right. Instead of silencing our voices, President Obama can also stand and do the right thing for our immigrant LGBTQ community”.

Click here for press conference footage and the Democracy Now interview with Gutiérrez.