Over the past few years TJFP has been lucky to have worked with some of the greatest hearts and minds committed to trans justice.

Many of you know that our beloved co-founder, Karen Pittelman has been working tirelessly behind the scenes as a full time volunteer staff member since TJFP’s inception, making it what it is today! As Karen thoughtfully steps down from her role as Administrative Coordinator, it is a great honor to introduce Marin Watts as our new Director of Operations and Communications!

Marin has supported TJFP in numerous ways over the past two years and we’re delighted to have his experience, talents and bright spirit on the team. Please join us in celebrating this major transition as Karen passes the torch and we welcome Marin on board!

A few words from Marin:

I am very excited to be joining the Trans Justice Funding Project’s team as the Director of Operations and Communications! I’m a queer/trans/Filipino multimedia artist and educator from the South, and am deeply committed to social justice and supporting the trans community. 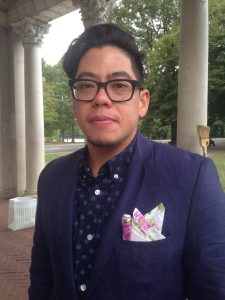 I’ve been volunteering as a videographer at TJFP since 2014, documenting the annual community-led grant-making process and the work being done by grantee organizations across the country. I’ve met and conducted interviews with community activists and organizers around the country working towards trans justice, and heard stories and strategies around what trans justice looks like in their local communities. I was later invited to participate in the 2015 Community Funding panel, where we funded over 87 trans led groups across the U.S. Following that, I teamed up with TJFP’s From the Ground to the Sky Tour, and have been a part of building relationships with grantees and conducting interviews with grassroots groups in rural communities.

I am so thrilled to be able to dedicate my time and skills to an organization that I feel passionately about. I’m truly inspired by the community of trans-led grassroots organizers and activists that we support at Trans Justice Funding Project!

Comments Off on Introducing our new staff member, Marin Watts!