Like many grassroots efforts, volunteers and interns are an essential. It takes a lot of love and people power to make things happen. Allow us to introduce one of our behind the scenes magic makers, Marin Watts. 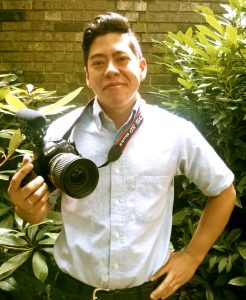 Multi-media artist, Marin Watts first sat down with TJFP in May of 2014 to brainstorm using media to make TJFP more visible.  Since then he’s generously volunteered his time and skills, documenting TJFP through photographs and film.  Marin lives in East Harlem, New York.

Why did you decide to volunteer with TJFP? I am committed to trans justice and fully support TJFP’s mission and goals. There is a tremendous lack of support for LGB organizations and projects, and an even bigger lack for organizations focusing on trans issues. To help promote trans justice and leadership, I’m dedicating my media skills to help increasing financial support for the trans community, and raise awareness of the amazing trans-led work already being done across the country. I volunteer with TJFP because my contributions extend to support to a larger network of trans-led projects across the country.

Why is trans justice work or funding trans justice work important to you? As a queer transman of color, I’ve overcome multiple obstacles in my life and have done so with the help of family, friends, and a larger network of community members. The trans community is underserved and is faced with a numerous road blocks. In my personal experiences, there has been multiple projects, services, and support groups, centered around trans justice that have helped me survive and thrive and also continue to motivate and inspire my work.

Since becoming a volunteer for TJFP/becoming a part of the organization, is there anything have you learned? Through TJFP’s process, they are creating a map of all these amazing organizations and projects that are involved in the movement! Although there is a lack of support for the trans community, folks are getting the work done. There is a lot of amazing work being done around the country that supports the trans community, and people are making it happen with very little resources, and when they have access to even just a little bit more funds, the work that can be accomplished is huge! Totally inspiring!

What do you enjoy doing in your spare time and/or what do you do when you’re not volunteering at TJFP?  I’m a multimedia artist and I run Media MA—an organization that empowers LGBTQ and allied youth through media! I really enjoy drinking good wine, eating delicious food, and hanging with my family and friends. I’m a very active bidder on Polaroid Spectra film on eBay, and am very seriously working on improving my BBQ and grill skills.

Thank you Marin for sharing your creativity and talents to document trans justice in action!  We continue to delight in working with you.

Comments Off on TJFP Behind the Scenes: Meet Marin Watts