Another fierce addition to this year’s team! 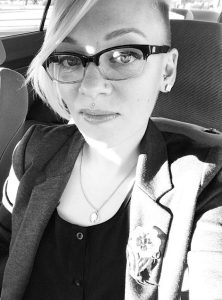 Originally from Las Vegas, Nevada, Mel moved to rural North Carolina in June 2014 to live with their partner, a black transmasculine revolutionary. They are a first year law student at North Carolina Central University, a Historically Black University in Durham, North Carolina. Their goal, if they complete law school, is to be a lawyer for the revolution, using their privilege in service to and in solidarity with transgender and queer people of color. Prior to moving to the South, Mel spent ten years working within the non-profit industrial complex, more than half of that time at a predominantly white, gay, non-transgender organization where they generally raised hell by encouraging the politicization of trans and queer youth and unapologetically advocating for, co-creating, and growing transgender programs and services, including one of the first multi-stall gender neutral bathrooms in Southern Nevada. Mel is also a co-founder of Gender Justice Nevada.

We’re already so thankful to have you be a part of TJFP, Mel!