“Every day I wake up, I bring my whole self to the table. There is never a day where I can leave my blackness, my queerness, my transness at home because somebody doesn’t agree with it or they don’t understand it.” -Quentin Bell, 2017 TJFP Community Grantmaking Fellow

In 2016, TJFP set out for our third From the Ground to the Sky listening tour through several Southeastern states. We drove down long windy roads surrounded by kudzu vines, past misty green acres, stopping in towns and cities along the way to listen, learn, and interview grantees and community leaders. So much of that trip feels like ages ago–on the other coast of a wide river of history, of the countless monumental political and social shifts that have rocked the last five years. But when we arrived in Selma, Alabama, five years ago, we were still reckoning with the expanse of history, with legacy, with change.

We had no idea how moved we would become after meeting with Quentin Bell, a community organizer and executive director of The Knights and Orchids Society, a longtime grantee of TJFP. Quentin graciously agreed to meet with us on his favorite bench overlooking the Alabama River to share the history of his beloved hometown. We sat with Que in front of the Edmund Pettas Bridge in Selma, where not so many decades before, a historic march for Black rights was met with police brutality, a day known later as Bloody Sunday. There is so much history present in a place: in a bridge named for a Confederate general, in a city that birthed the Civil Rights movement of the 1960s, in a nation built by stolen labor on stolen land. We spoke until sundown, the light illuminating Spanish moss on the trees that shaded so many organizers, activists, and changemakers of years past. Que described his relationship with the history of Selma, and his choice not to move away from the area but instead to stay, organize, and build a legacy of trans and queer organizing and activism within the city he calls home.

After we finished the interview we hugged and parted ways. Ever since then I haven’t been able to stop thinking about what that historic bridge represented to our elders, and the inspiration we can draw from their work. I constantly wonder how on earth did they have the energy, the courage and conviction to keep going with so much uncertainty ahead of them? Who showed up to support those organizers and protesters on Bloody Sunday to keep them safe, supported and resourced?

Five years later, watching the footage of this interview still fills me with infinite love and appreciation for Black trans leaders in the Southeast and everywhere. Our Blackness, our transness, our humanity is a powerful force.

What we know of the realities of history is that there’s a lot to be gained for surviving and returning to fight another day.

Knowing our history is more than simply learning dates, names, events and stories. We are bearing witness to past experiences and tales of ancestors. If we’re lucky enough to learn from the lessons embedded in their stories, there’s a blueprint they’ve left for us to make our present day something better then what existed before. One of the greatest lessons that I’m reminded of every time I read an application or work with a new Community Grantmaking Fellow is that there are no limits to who and what we can become. Only the limits we put on ourselves and unto others. Our ancestors in their own ways taught us this, fought for this, and lived their lives in hope for the future.

At TJFP we celebrate and believe in Black trans leadership all year long. This is a commitment and responsibility we prioritize as an act of love and a politic. So as Black History Month comes to an end, TJFP would like to commend Black trans/non binary leaders everywhere! We wouldn’t be where we are now without your hopes, dreams, honesty, boldness and unwavering undertaking of liberation work. TJFP exists to support you and we exist because of you! 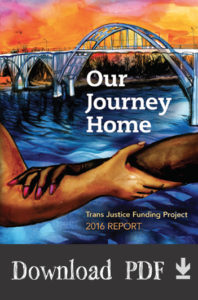 For more stories from our 2016 From the Ground to the Sky listening tour, click here to download our 2016 Annual Report!

As we practice the discipline of hope while reshaping and reimagining better futures, we can draw inspiration from Quentin’s commitment to return to his hometown and share what he knows with his communities.

“How dare I go away and keep that knowledge and not bring it back to the very place it needs to be?”

We dream, and we hope, and we build–and we will all be part of history, in the end.

Comments Off on A bridge to history: TJFP celebrates Black History Month!